The Embassy in the Building ratings (Movie, 2005) 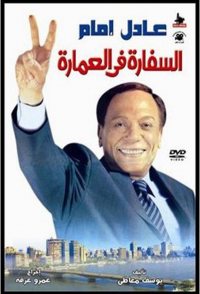 Revolves around Sherif Khairy (Adel Imam) person fiddler multi reckless female relations, which dates back to Egypt after 25 years spent in an oil engineer in the UAE, and dismissed from work because of the relationship with his boss at work and then be surprised Bjrd the Israeli embassy in the building, home to Cairo and during the events of the film we see suffering because of the security measures that impose it because of it. Which pays to shift from selfish man has nothing to do with politics to someone an anti-Israel and turned into a popular icon and raise backed by public opinion to bring out the embassy architecture issue, to be pressed even stop his campaigns against the presence of the embassy in architecture. But the defense resumes again and the struggle after the death of Iyad son of his friend who is accustomed to authenticated in the Palestinian uprising, V_ial patriotism again and come back to the struggle against Israel and normalization.