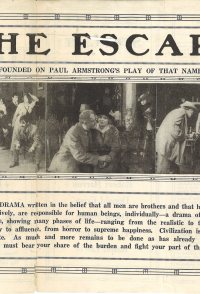 After a prologue illustrating the careful reproductive process of microbes and farm animals, as opposed to the random selection of humans, the effects of unwise selection are depicted by the Joyce family, whose brutal father Jim turns his gentle dreamer son Larry into a deceitful sadist who delightedly strangles a kitten. While treating Larry for venereal disease, Dr. Von Eiden advises Larry's sister May to leave home. She does, but unable to find work, she becomes the mistress of a wealthy man whom she refuses to marry. Jennie, May's consumptive sister, marries Bull McGee, May's loutish former suitor. Jennie gives birth to a sickly child, who is crushed to death by McGee when he trips over the baby's crib in a drunken state. Jennie becomes deranged and replaces the child with a doll, thus disgusting McGee who sells her to a gang of pimps. Jennie is rescued from a life of prostitution, but dies shortly thereafter in May's arms. Larry has an operation that restores his gentle nature, ...