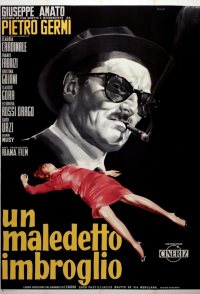 A masked bandit steals valuables from Commendatore Anzaloni's apartment and flees, leaving Anzaloni unharmed. Inspector Ingravallo is called in. The robbery is suspicious; the thief found the jewellery too quickly. The neighbour, Liliana Banducci, employs a servant girl, Assuntina. Her fiancé, Diomede, tries to flee when he sees police tailing Assuntina. But Diomede has an alibi, a rich American woman... Liliana's cousin, Dr. Valdarena, pays her a visit, only to find her body on the floor. But before calling police, Valdarena removes an envelope addressed to him from the sideboard... Liliana's husband Remo was away from Rome at the time of the murder, but he is surprised to hear that Liliana had changed her will only the week before...