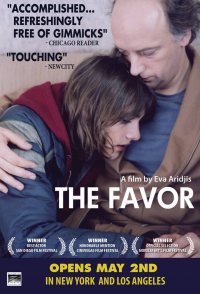 Lawrence (played by Frank Wood), a photographer living on his own in New Jersey, rekindles a relationship with his old flame Caroline (played by Paige Turco) shortly before she dies in an accident. Her 16 year-old son Johnny (played by Ryan Donowho) has nowhere to go and Lawrence takes him in. Lawrence tries hard to be a father to Johnny but Johnny repeatedly rejects him and wreaks havoc in his home. Many dramatic and comedic events unfold, involving Johnny's love interest Mariana (played by Isidra Vega), Johnny's drug dealer (played by Jesse Kelly), Johnny's real father (played by Aldo Perez), and Lawrence's dog (played by Nikki). "The Favor" features songs by The Cure, The Troggs, The Stone Roses, Interpol, Nikki Sudden, Blondie, The Cascades, Chris Montez, The Jacobites & The Garretts.