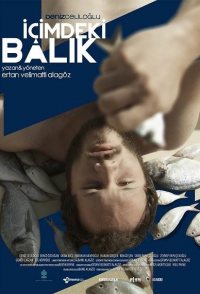 The Fish In Me tells the liberating story of Barris, who is stuck in his physical and mental limitations, by using the metaphor of opening up from the aquarium into the sea. Barris, a marine biologist in his thirties, was born with a defect in his left hand, making his hand look like a fin. He tries to find a meaning to his physical and psychological problems by using science, especially the theory of evolution. He runs experiments in his aquarium shop in the old town of Istanbul, looking for evidence to support this theory. The limited life that he built for himself comes to an end with a hypnotherapy session, after which he sails to the Aegean Sea, looking for people like him.