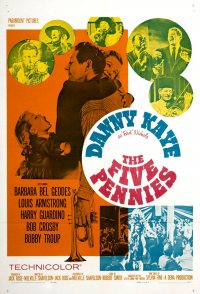 Loring "Red" Nichols is a cornet-playing country boy who goes to New York in the 1920s full of musical ambition and principles. He gets a job playing in Wil Paradise's band, but quits to pursue his dream of playing Dixieland jazz. He forms the "Five Pennies" which features his wife, Bobbie, as vocalist. At the peak of his fame, Red and Bobbie's daughter, Dorothy, develops polio. Red quits the music business to move to Los Angeles where the climate is better for Dorothy. As Dorothy becomes a young teen, she learns of her father's musical past, and he is persuaded to open a small nightclub which is failing until some noted names from his past come to help out.