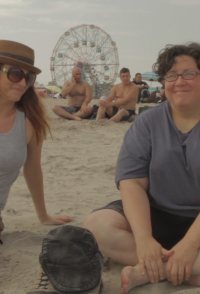 Two lesbian hookers wind their way through a world of bargain-hunting housewives and double-dealing conservative women in this buddy comedy, an homage to and riff on iconic male hustler films. Margaret is a down-on-her-luck hooker in training, who meets up with Jo, a beautiful and self-assured grifter from a wealthy family and an expert on servicing women, even as she considers herself proudly heterosexual. The film follows their adventures together on the street, through encounters with husky-voiced seductresses, mumbling erotic accessory salesmen and shopaholic swingers. Navigating the bizarre fetishes and sexual needs of their 'dates' brings into focus the hilarious and pathetic disparity between the two hookers, fellow travelers who will share the road together but only for a while.