The Gentleman from Indiana ratings (Movie, 1915) 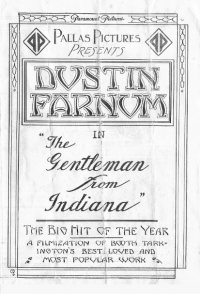 After a spectacular college football career, John Harkless leaves the university to pursue a place in Indiana politics. He buys the failing Plattville Herald and, using the newspaper to expose various illegal activities, sets out to rid the county of all mobsters and corrupt officials. When a traveling circus comes to town, he uncovers a crooked gambling ring and drives away the fleecers. That night, returning from his sweetheart's house, he is badly beaten and left for dead by a gang of men. Believing that John has been murdered, vigilantes gather to avenge his death, but the identity of the perpetrators is in question. The evidence finally points to the White Caps, a band of thugs allied with Rodney McCune, a notorious local politician opposing John in an upcoming Congressional race. Before the angry mob clashes with the White Caps, John is located in a hospital emergency room. While he recovers, his girlfriend, Helen Sherwood, takes over the newspaper and cleverly concocts a way ...