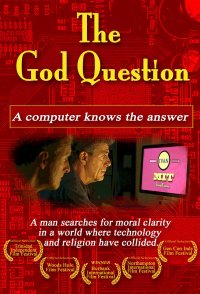 A startling breakthrough in artificial intelligence at MIT produces the first super-intelligent computer capable of thinking independently, as humans do. With an "IQ" that is incalculable, it is fluent in all languages and able to read a book in a fraction of a second. Stephen Kendrick, who runs a government supercomputer at University of Massachusetts in Amherst, previously taught at MIT and was one of the key code writers for the project. Hearing this, a Yale philosopher, Jane Hurst, suggests the following to him: Feed the computer every book, news article, research paper, and Internet posting - essentially all human knowledge - then ask it the ultimate question. Is there evidence for God, for a spiritual framework to life? "This computer is smarter than any of us, than all of us put together. Maybe it can make a novel interpretation of the human experience, something no one has ever thought of, to say whether the idea of a god makes sense," she says. Kendrick tells her the question...