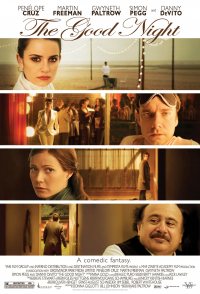 Former British pop star Gary Shaller (Martin Freeman) is at a crossroad in his life: his job in New York City is going nowhere, his American wife, Dora (Gwyneth Paltrow), drives him crazy, and he passed his thirtieth birthday four years ago. Add to that his best friend Paul (Simon Pegg) seems to become more successful every time he breathes. Gary is feeling depressed and dejected, until he meets Anna (Penélope Cruz). She's glamorous and smart; she's seductive and witty. Best of all, she's crazy about Gary. Anna is the girl of Gary's dreams, literally. And that's the problem. Gary can only see Anna in his dream life, so he has to find a way to carry on the most satisfying relationship of his life, in his dreams. His quest for lucid dreaming techniques introduces Gary to some crazy characters who ultimately give him a new perspective on life.

The Chronicles of Narnia: The Lion, the Witch and the Wardrobe
Total votes: 361,021
Average rating: 6.9