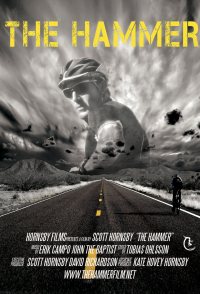 The toughest race in the world is about to be seen in a whole new light in Hornsby Films' new documentary, The Hammer, about one rookie cyclist's attempt to win the Race Across America (RAAM) The film follows renowned adventure-racer, Jason "The Hammer" Lane, during his 2012 RAAM attempt and shines a spotlight on the cyclist's rookie, but well-meaning crew in a way never before depicted. When The Hammer gets hit, run over, and dragged by a car on day three of the race, the film takes a turn that no one anticipated. The Hammer film, quite literally, brings the viewer into the driver's seat of a RAAM follow vehicle. It exposes the friendships, conflicts, perseverance and humility that comes with a 3,000-mile transcontinental bicycle race and getting one man, on a bike, across the country safely in less than 10 days.