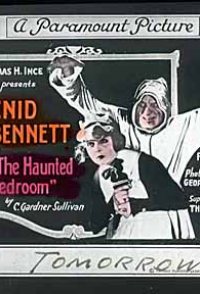 Journalist Betsy Thorne travels from New York to Virginia to cover a story about the disappearance of Daniel Arnold at a supposedly haunted estate. In order to get into the house, she pretends to be a maid. In the household she meets Daniel's sister Dolores, the neighbor Dr. James Dunwoody who loves Dolores, and his son Roland, who is under suspicion. Betsy pretends to be tough, but when she sees a ghost emerge from the chapel, she screams. The result is that Dolores locks her in at night. The following night, Betsy climbs out of her window and sees the ghost again, this time in the graveyard. After some intrepid investigating, she finds that playing certain chords on the chapel organ cause a door to open, leading into a passage to a tomb. Betsy bravely pursues the ghost who turns out to be Daniel, though he has become deranged. Further, she discovers that he is actually desired by the law as an international forger.