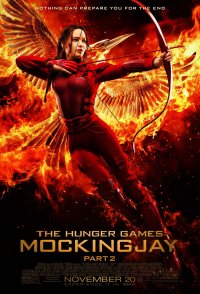 After young Katniss Everdeen agrees to be the symbol of rebellion, the Mockingjay, she tries to return Peeta to his normal state, tries to get to the Capitol, and tries to deal with the battles coming her way...but all for her main goal: assassinating President Snow and returning peace to the Districts of Panem. As her squad starts to get smaller and smaller, will she make it to the Capitol? Will she get revenge on Snow or will her target change? Will she be with her "Star-Crossed Lover," Peeta, or her long-time friend, Gale? Deaths, bombs, bow and arrows, a love triangle, hope... What will happen?

Hunger Games (Movie franchise)Search for articleSearch for trailerSearch for everything