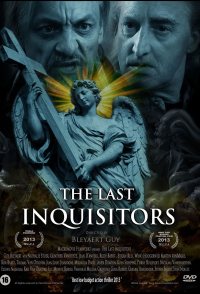 Father John ( Guy Bleyaert ) an orphan and ex ranger who lost his best friend during Operation Fury in Grenada steps in to a church and meets a Cardinal of the Roman Church, he convinced John to become a priest and sends him to study the Bible. 25 years later, John who is a priest in a quiet town church gets a visit of his superior bishop. Father John is invited to the board of a extreme Catholic cult who believes that it's God's will to rid Earth from all human evil was given to them as a mission. Father John decides to refuse the offer and is kidnapped and arrested for heresy and conspiracy against God. The crusaders who belong the worldly power throw him in a dark cellar where people getting tortured to amid there sins. A young prostitute named Maria is locked up with John. Young Vincent a recruit of the crusaders helps Father John and Maria to escape from their cell. Brother Francis the leader of the God squad is furious and starts to hunt them down with a handfull crusaders. After...