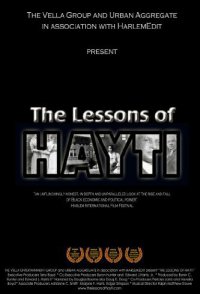 The ''Lessons of Hayti'' is a one-hour documentary which examines the unique history of Black self-sufficiency and political power in the United States from its origins just following President Lincoln's Emancipation Proclamation of 1863 up to the second inauguration of America's first Black President 150 years later in 2013, as well as how that power has eroded since the Civil Rights era, leaving Black America in its current state of economic turmoil.