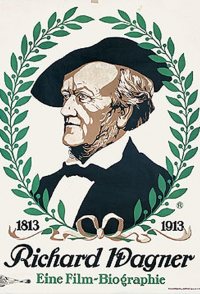 At the age of eight, Wagner plays for his dying step-father. When sixteen he studies with Cantor Weinlig. Then follows a period of dissipation. In 1834 he is offered the position of conductor of the Lauchstadt Opera. He first refuses, but, meeting the leading actress, Wilhelmina Planer, he accepts. In 1836 he is conductor at Konigsherg, and marries "Minna." They quarrel over his extravagance, but are reconciled in time to greet their friends. In 1838 Wagner is conductor at Riga. While rehearsing he is interrupted by his creditors. Assisted by his friend Moller, he eludes them and the Cossack sentries. He reaches a German seaport, where he boards a small sailing vessel and starts for Paris. During the voyage a terrific storm inspires "The Flying Dutchman." Arriving in Paris he calls upon Meyerbeer and plays parts of "Rienzi" for him. Meyerbeer gives him letters, among them one to the director of the Paris Opera, who, however, reuses to do anything. He calls upon Liszt, who receives him...