The Light Shines Only There ratings (Movie, 2014) 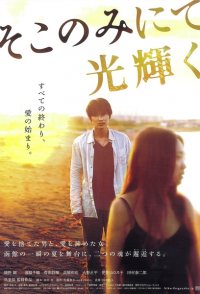 In a Japanese port town, Tatsuo, a traumatized man, spends his days drifting aimlessly and his nights drinking himself to oblivion. Whiling his hours away at a pachinko parlor, he meets Takuji, a young man on parole who impulsively invites him to a shabby house on the outskirts of town. There, Tatsuo glimpses Takuji's bedridden father and callous mother, and meets his world-weary older sister Chinatsu. While immediately drawn to each other, romance is an unaffordable luxury for the emotionally closed-off Tatsuo and the disillusioned Chinatsu, who sells herself to provide for her family and keep her brother out of jail. As Tatsuo and Chinatsu take tentative steps towards a relationship, the happy-go-lucky Takuji latches onto Tatsuo, binding their fates. Each step they take to build a better life sets off a chain of actions that have devastating consequences.