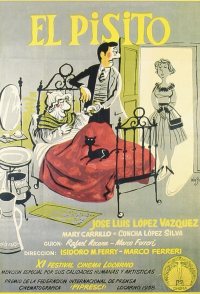 Rodolfo and Petrita each live in separate quarters in dilapidated Madrid, while looking to have a little apartment (or "pisito", in Spanish dialect). Unfortunately their low salaries prevent them from acquiring one. Soon, Rodolfo's co-workers urge him to marry the old and frail Doña Martina, who is the main tenant in the apartment he boards in. According to Spanish rent-control law, he could inherit the lease from his spouse. Thus begin his misgivings and Petrita's.