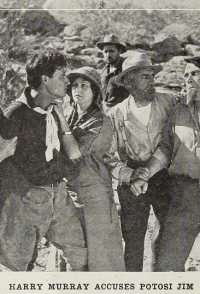 Harry Murray has rescued an old prospector, Rhodda, when almost perishing from thirst on the mid-Australian desert. Rhodda, in gratitude, promises the youth an interest in a rich claim he had located. But another man, Potosi Jim, knows of Rhodda's discovery and steals the rough map marking the precise spot. The shock of this act of theft kills Rhodda. Meanwhile Potosi Jim, already bent on jumping the gold claim, had dispatched his mate, Blaxland, to the city to get money to take up and develop the prospect. Blaxland brings to the gold fields Colonel Baylor, a mining speculator, previously acquainted with Potosi Jim, also a capitalist named Cuthbert, who is accompanied by his daughter, Hilda. By the same train arrives Jack Murray, owner of a sheep station, intending to bring his younger brother Harry home and away from the gold fields life. But Harry interests Jack in Rhodda's find, and the two brothers start out to seek it. Potosi Jim's party starts out later. All meet near the last ...