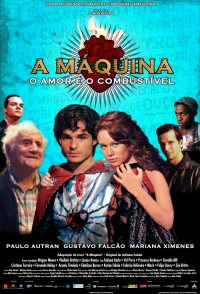 Karina has 2 dreams: to become an actress & to see the world. Antonio is in love with her. He promises to bring the world to "Nordestina", a village in the sticks of Brazil. This backwater village has 2 population groups: those who are leaving, and those who are thinking about leaving. Antonio leaves in what appears to be a suicide crusade - openly promising on TV that he will give his Karina all she could wish for, or he'll face a deadly machine he has invented. To challenge fate, he also declares that he'll travel into the future. The day he has to make good on his promises, all "Nordestina" is there, expecting Antonio to realize his promises.