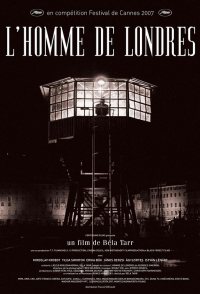 One night Maloin, a switchman at a seaside railway station situated by a ferry harbor, witnesses a terrible event. He is just watching the arrival of the last ferry at night from his control room on top of a high iron traverse from where he can see the whole bay. Suddenly he notices that the first of the disembarking passengers, a tall thin figure (a certain Brown as it will turn out later) leaves the harbor, but not on the usual route: after getting through customs, he goes around the dock and then withdraws into a dark corner, waiting. Opposite him, in front of the ship, another man soon appears and throws a suitcase towards the man on the shore. He goes and picks it up, then waits in an dark corner for the other man to join him. When he arrives, however, they begin to quarrel and finally, in the course of the vehement fight, due to a hit that turns out to be fatal, the shorter one falls in the water and sinks, clutching the suitcase in his hand. Maloin is watching the scene, ...