The Man Without a Country ratings (Movie, 1917) 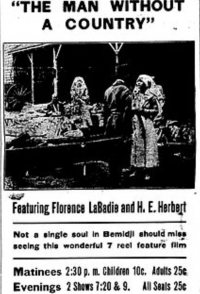 When Barbara Norton is left orphaned, she goes to live with her aunt and uncle. Time passes, now grown to adulthood, Barbara, becomes engaged to a wealthy young man who believes in pacifism. When the United States declares war on Germany, Barbara's fiance declines to enlist, and so Barbara gives him back his engagement ring and goes to France as a Red Cross nurse. En route, her steamer is torpedoed and Barbara is assumed to be drowned. Even this tragedy does not inspire the young man's patriotism and when solicited to enlist, he declares that the United States be damned. These sentiments shock an old friend of his father's, who brings the young man a copy of the book The Man Without a Country . Upon reading the book, the young man visualizes the story of Philip Nolan and is compelled to serve his country. As he is about to go to war, Barbara returns, and the two lovers embrace.