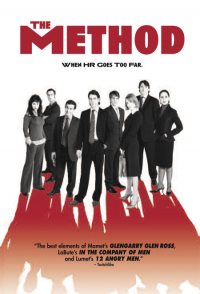 During IMF & World Bank Summit and demonstrations which upset Madrid, like other capitals, major corporation Dekia holds interviews to recruit a top executive from seven applicants. Their doubts start when they have to sign a clause accepting the Grönholm method, which nobody ever heard of. It soon becomes clear the tests are dirty mind games, but never what is true and what the trick. They must guess who among them is the HR mole, and repeatedly eliminate one of their number from the procedure. Their priorities, ethics and loyalty are put trough stressing tests.