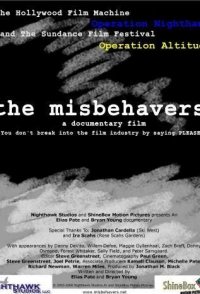 The Misbehavers documents a small army of guerrilla filmmakers as they converge at the 2004 Sundance Film Festival for a mission dubbed Operation: Altitude. The objective: book a venue, market a film, attract acquisitions representatives and pack the screenings beyond capacity. Essentially, they set out to create their own film festival from the ground up in less than two weeks and all no financial backing of any kind. The film chronicles the amazing heights of passion, humility and unity met with the unbelievable lows of self-sacrifice, ego and division that exists even in the lowest levels of the independent film world.