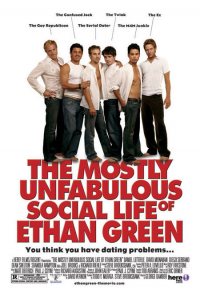 Twenty-six year old gay Ethan Green has a number of good friends such as his currently single lesbian roommate Charlotte, but has never been able to maintain a long term romantic relationship, he who ultimately breaks it off with whoever he is dating if that significant other has not already broken it off with him. He ultimately discovers that he is largely to blame, as every guy who has broken it off with him felt forced to do so in some unspoken pressure by him. As such, Ethan begins to wonder if his Mr. Right is one of his exes who is still in his life for one reason or another. They include: Kyle Underhill, a formerly married pro baseball player who came out because of him and is still in his life solely as the one with who he seemed destined to be; Juarez, who still lives with Ethan's wedding planner mother, Harper Green, as arguably each other's current best friend; LGBT bookstore owner Leo Worth, in whose house Ethan and Charlotte currently live, the house which Leo bought as ...