The Mystery of Happiness ratings (Movie, 2014) 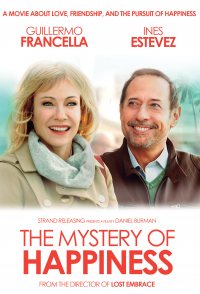 Santiago and Eugenio are more than friends, they are life long business partners. They understand each other without words, they care for each other, they need each other. One day Eugenio disappears without leaving any clues behind. Santiago immediately notices his absence, but only realizes what have happened when Eugenio's wife, Laura, lost and hopeless assures him that Eugenio has left. Santiago and Laura begin a journey in order to find him and end up discovering that they prefer to stay together in this quest rather than finding out where he is. 'The Mystery of Happiness' is a film about love, but goes beyond it, it pushes boundaries, it explores the idea of loyalty and estrangement, and it definitely puts dreams over long lost promises.