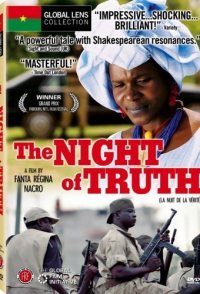 La Nuit de la Vérité is situated in an imaginary West African country. After ten years of civil war between the government army of the Nayak, led by 'Le président', and the Bonande rebels led by Colonel Theo, there is some sign of peace negotiations. But not everyone is in favor of peace and one can feel the tension. The night of truth starts with a festive dinner, but the village idiot Tomoto always seems capable of ruining the attempts for peace with violence and provocation.