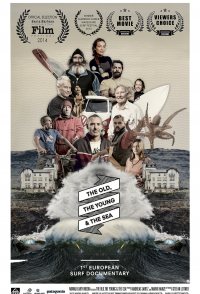 The Old, the Young and the Sea embarks on an adventurous documentary trip along the Atlantic Coast of France, Spain and Portugal. The movie frames a vivid snapshot of European post modern coastal culture which is significantly influenced by the hippie heritage of the 60s, modern surfing pop industry and the vital relationship of coastal inhabitants with mother nature. The movie introduces into a world of cultural discovery, surprising encounters and the search for the spirit of traveling. For the protagonists surfing is a pervading lifestyle. All sorts of ocean lovers have their eyes on a very slim stretch of land and water. Documenting this the documentary captures a schematic picture of vibrant European life through the very personal stories of the movies protagonists.