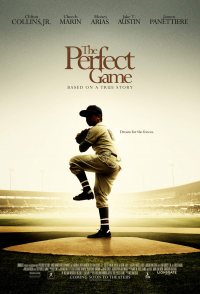 Based on a true story. In 1957 a rag-tag, shoeless, poor group of kids from Monterrey, Mexico shocked the world by winning 13 games in a row and the Little League World Series in the only perfect game ever pitched in the Championship. These kids, led by their priest and a down-and-out former major leaguer embark on a journey through the southern US and up into Williamsport, PA for the Championship game. They encountered many adversities including nearly being deported and the bigotry that wouldn't allow them into certain restaurants or travel on certain buses. They never lost their faith and eventually captured the hearts of both nations. This is a heart-warming inspirational story in the tradition of "Rudy", "Hoosiers", "Coach Carter" or "Friday Night Lights".