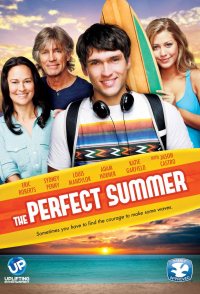 In The Perfect Summer, fatherless teenager Jake (Adam Horner) is happy living in Chicago, until his mother (Sydney Penny) decides to uproot them to a small surfing town where her estranged father (Eric Roberts), Jake's grandfather, lives. The transition isn't easy for anyone and it seems everywhere he goes, Jake manages to make enemies, including the town bully, Tyler (JD Banks), who doesn't like the new interloper or his interest in young surfing prodigy, Kayla (Katie Garfield). Stuck in the beach town with no friends and no knowledge of surfing, Jake has nowhere to turn until Cody (Jason Castro), the local surf shop owner, reveals that Jake's grandfather is a surf legend. Tired of feeling like an outcast, Jake asks Lou to teach him about surfing. Jake learns to face his fears, push through inhibitions and realizes that winning the respect of his new peers - and Katie's heart - might mean facing the biggest challenge of his life.