The Place Beyond the Winds ratings (Movie, 1916) 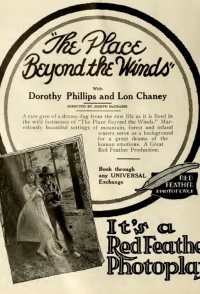 Priscilla Glenn is a product of the woods, a wild, impulsive, nature-loving child. Her father is her antithesis, seeing none of the beauties of nature, thinking women only creatures to be browbeaten. Between her mother and herself there existed a strong bond of love and understanding, understanding that they were companions in the same misery and unhappiness. Priscilla had to fight for an education. At last, through the efforts of Anton Farwell, the schoolmaster, Priscilla had the opportunity of beginning her education. For a rest there came to the spot Mrs. Travers and her crippled boy, Dick, and later a specialist, Dr. Leydward, who was to eventually straighten the crooked limbs of the boy. Priscilla and Dick met and a romance between the two was begun. Jerry Jo, a half-breed, coveted the girl, and lured her to a house on the hill where there was a library. Although the girl was as sweet and pure when she returned home the next day her father sent her from his roof. Priscilla went ...