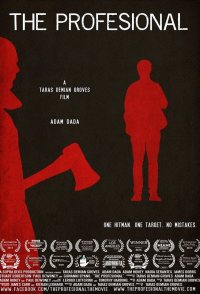 Set in London in a time when being a contract killer is a legal profession, a camera crew film the reclusive, enigmatic hit man, Eli Shepard, as he undertakes one hit. The deeper both they and the audience delve into Eli's callous and brutal world, the darker things become; as we encounter dangerous psychopaths, surreal relationships and extraordinary characters. The Profesional, misspelt in connection to its themes of mistakes and the flaws that define us, is an ambitious and innovative zero budget feature film, made for no more than the price of a weeks shopping, that isn't afraid to investigate the most important question of all: in an increasingly detached, apathetic society... how do you feel?