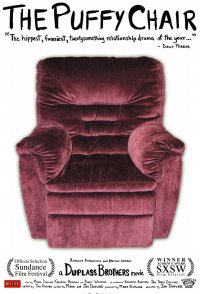 Josh and Emily are in a relationship, but he can be inattentive and unromantic and she can shift her focus from small things to emotional issues in a moment. He invites her to drive from New York City to somewhere in Virginia to pick up a chair that he's bought on eBay for his father's birthday. On the way, he stops at his brother Rhett's, outside Philly, and invites him along. Josh tries to save money at a motel, has to negotiate with the seller of the chair and with an upholsterer, and faces tough questions from Emily. He calls her "Dude," he's moody, and it looks as if the relationship will end soon. Is there more than meets the eye here? How do people decide?