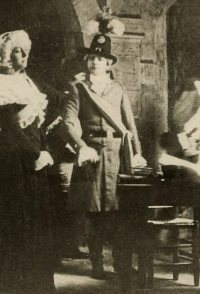 The scene takes place in Paris in March 1793 during the Reign of Terror. The Knight of Maison-Rouge, posing as Citizen Morand, is organizing the escape of Queen Marie-Antoinette. He is assisted in his undertaking by Dixmer, a master tanner who passes himself off as an ardent revolutionary and his wife Geneviève, who also happens to be the Knight's sister. While on mission with her brother, she is saved from arrest thanks to the intervention of Lieutenant Maurice Lindey. Geneviève, who is married without love to Dixmer, falls for the young man, who requites her love. A tunnel is dug between a house rented by Dixmer and the Tower of the Temple but the various attempts to rescue the queen attempts fail. Marie-Antoinette risks the guillotine/ Moreover, Lindey finds himself involved in the plot...