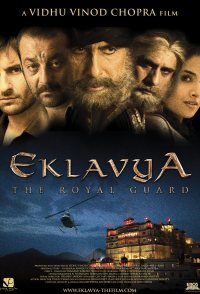 It has been chronicled in the Geeta that Eklavya wanted to be Sage Dronacharya's disciple in order to excel at bow and arrow shooting, but was refused because of his low caste. He decided to teach himself, and did excel to such an extent that Dronacharya felt threatened that he would beat his ace disciple, Arjun, so he asked Eklavya for his fee - his right thumb, which Eklavya dutifully cut off and presented it to his Guru. Now in modern India, Nishab, whose father was Eklavya, who gave his life trying to protect his master, has now been re-named Eklavya himself, and has been entrusted to guard the lives of Rana Jaywardhan, Ranimaa Suhasinidevi, and their children, Harsh and Nandini, will be called upon to pay the ultimate price, after he learns that his master, the Rana, has been killed. Eklavya, who also carries a dark family secret, slays the two assailants of the Rana, but then in the process also finds out that th! e one who hired them is his very own son. What will prevail - ...