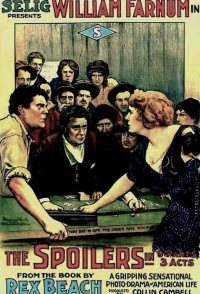 As owners of the richest mine in Alaska, Roy Glenister and his partner Dextry go to the States during the winter after Glenister has reached an "understanding" with dance hall girl Cherry Malotte. Meanwhile, in Washington, Alex McNamara wants to send corrupt Judge Stillman to Nome to further his scheme to rob all of the mine owners in Alaska of their claims. When the judge becomes ill, he sends his unwitting niece Helen Chester with the important documents to Alaska. On the trip, she meets and is mutually attracted to Glenister. In Alaska, McNamara's scheme is almost accomplished until Glenister and Dextry, with the aid of lawyer Bill Wheaton, precipitate the arrest of the conspirators and the restoration of their claims. The Bronco Kid, who with Cherry had hoped to keep Helen and Glenister apart, turns out to be Helen's long-lost brother. In the end, Helen and Glenister admit they love each other.