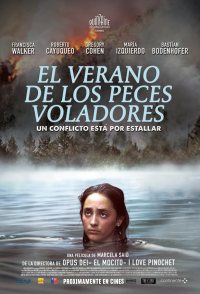 Manena is a very determined teenager, and the darling daughter of Pancho, a rich Chilean landowner who devotes his vacations to a single obsession: the extermination of carp fish that invade his artificial lagoon. As he resorts to more and more extreme methods, Manena experiences her first love, deception; and discovers a world that silently co-exists alongside her own: that of the Mapuche Indian workers who claim access to these lands - and who stand up to her father.