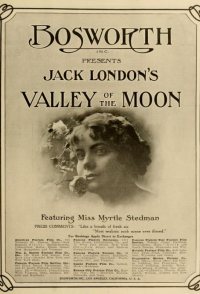 At the opening of the play Billy Roberts is successively a pugilist and a teamster, and Saxon, a young girl, works in a laundry. They meet at a Weazel Park picnic, the afternoon of the lively "roughhouse" between San Francisco and Oakland. They find each is of the race of the sturdy pioneers, which crossed the plains on foot and founded the new empire of the West. "We're just like old friends, with the same kind of folks behind us," says Billy. We see their simple wedding, and the happiness of the new life. Then comes the teamsters' strike, with its consequent poverty and unhappiness and the embittering of Billy's spirit. A succession of scenes shows the rioting that ensues when strike-breakers are imported. A thousand men were used in this part of the play. The action does not pause from the moment the strike-breakers leave the train until the riot culminates in front of Saxon's eyes, in the killing of Bert, Billy's chum. Things go from bad to worse, but it is when their fortunes are...