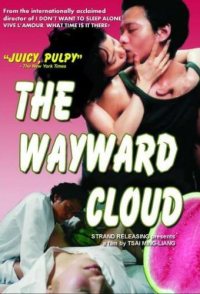 Metaphor, allegory. There's a drought in Taiwan. Watermelon are abundant and become juice, food, something to share with a guest, and an aphrodisiac. In a large building of flats, Hsiao-Kang and Shiang-chyi's paths cross; she knew him when he sold watches, now he acts in pornographic films. She scavenges for plastic water bottles. He bathes in the building's cistern. Fantasy song and dance numbers punctuate the characters' nearly aimless pursuits: she has lost her keys and he helps her find them; he naps in a park, she watches; he smokes on the floor beneath her kitchen table while she sits. His film-making continues. Can they connect?