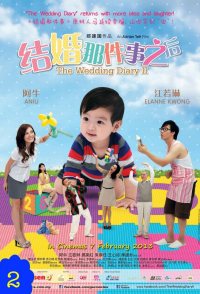 The Wedding Diary 2 picks up two years after the marriage of Wei Jie (Aniu) and Zhixin (Elanne), when they welcome a new and unexpected addition to their family. However, all is not well for Wei Jie's in-laws when Zhixin's father, Colin (Jack Choo) suffers a stroke, which puts a strain on the couple's relationship as Zhixin has to step up to handle her father's business and at the same time, ensure that her mother (Kara Hui) does not fall into depression and anxiety due to her husband's condition.