The Wishing Ring: An Idyll of Old England ratings (Movie, 1914) 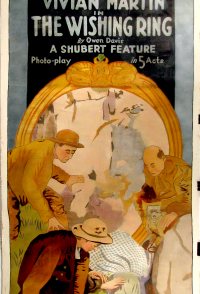 Sally, a parson's daughter, though in rags and well-ventilated shoes, had artistic instincts and the two vases, though far too rich for her father's church, were flowerless. In her innocence she argued "That man Annesley has an immense rose garden and surely he can spare a few roses for our church," and gathered an armful without the formality of saying, "By your leave, sir." Annesley was annoyed, even to the point of anger, at these mysterious disappearances, and finally, during a quarrel with his gardener, the latter threw his apron in Annesley's face and left. Again, if Giles, the son of the gouty, testy Earl of Bateson, had applied himself more assiduously to his studies instead of making night hideous for the village by his carousals with his boon companions, he would not have been arrested, and expelled from college. On his return home to father, the latter placed him in the hands of a tutor, from whom Giles escaped and arrived at his friend Annesley's rose garden at the ...