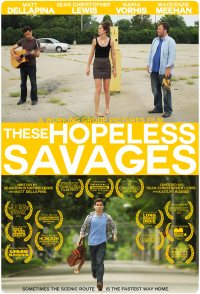 Based on an original screenplay, THESE HOPELESS SAVAGES stars Matt Dellapina ('Safe', 'The Quitter') alongside Sean Christopher Lewis ('God's Country'), MacKenzie Meehan ('The Wolf Of Wall Street') and newcomer Maria Vorhis in this bromantic comedy/drama co-directed by Sean Christopher Lewis and Kaitlyn Busbee ('Molly's Girl'). When big news comes in for the constant bachelor Shawn, he makes it a mission to visit everyone who has shunned him for years. This includes his old friend Greg - a children's musician living in the cozy, domestic confines of Brooklyn. After the two old friends hit some hilarious re-acquainting pains, they soon hit the American road for a trip that will show them the gifts and the costs of real friendship.