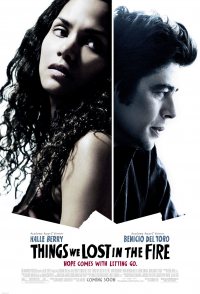 Grief, recovery, and human contact. Brian is a great guy - a sweet father, a good husband, and a loyal friend to his boyhood pal Jerry who's a junkie. When tragedy strikes, Jerry tries to help Brian's wife and children cope, and Audrey, Brian's widow, tries to help Jerry kick the habit. Loss and addiction are stubborn. The story starts on the day of the funeral, with Brian appearing in flashbacks. A neighbor's divorce, a dinner party that includes a young woman from the Narcotics Anonymous group Jerry attends, and thinking back to a fire in Brian and Audrey's garage give the story texture.