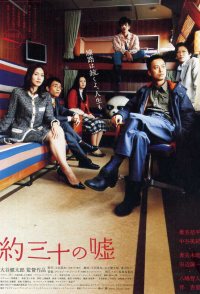 "Yaku san-ju no uso", otherwise known as "Thirty Lies Or So", is about four men and two women who plot to defraud a mystery company. Each character tries to deceive the other out of the 70 million yen they stole. The story is set on a train, both on the way towards their destination and on the way back, when they have the suitcase full of money. The money disappears several times, all players put under suspicion. This movie has several twists and turns and is a fairly good mystery/suspense.