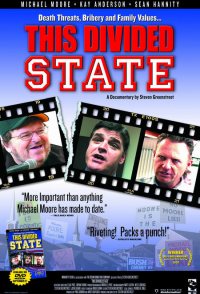 The film carefully examines the divisive nature of politics in an overwhelmingly conservative mid-western community. In September 2004, the student body representatives of Utah Valley State College invited controversial filmmaker Michael Moore to speak on campus two weeks before the Presidential election. An unanticipated uproar from the students and community ensued. Moore protestors claimed university funds should not pay for Moore's visit, while those in support of Moore fought to defend free speech. A community once considered politically passive was stirred to action, and the conflict played out in the media and several public forums. Those opposed to Moore's visit, in an effort to have the invitation rescinded, resorted to death threats, petitions, law suits, and bribery. Moore supporters, living in the high concentrate of Mormon conservatism, struggled to be heard, to defend new ideas, and to keep plans for his visit on track. Steven Greenstreet, the film's director, tracks the...