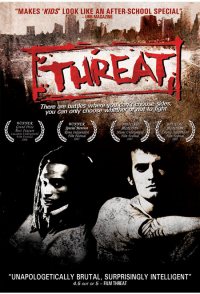 THREAT revolves around a street riot in NYC's Lower East Side. At the center of the riot are two friends (a homeless straightedge punk named Jim and a hip hop revolutionary father named Fred) who inadvertently cause the riot when they bring their street tribes together and fail to avoid a conflict that quickly spirals out of control. As the characters struggle through the chaos, some seeking to stop the violence and others seeking to escalate it, they face their own demons and find their own forms of redemption and damnation.