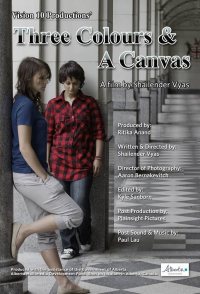 Under the kind of strange circumstances that seem perfectly normal at the time, four new friends meet, forming an unlikely bond over their shared desire to carve out a slice of the world for themselves. Anarosa, Cassidy, Hurk and Winder are four young adults exploring new worlds of freedom and responsibility when they are brought together after a hurried foot-chase through the streets of Calgary. Drawn together both by their willingness to live like there are no consequences for their actions and by their disillusion in a world that seemingly has no place for them, they embark on a journey of discovery and hope - hope that, above all else, they'll find their own path in life. Their actions soon catch up to them and, as their lives begin to spiral out of control, the four friends struggle to make the right choices and regain their footing. Three Colours + A Canvas is an emotional drama of friendship and hope, seemingly innocent choices and their consequences, and the realities of ...