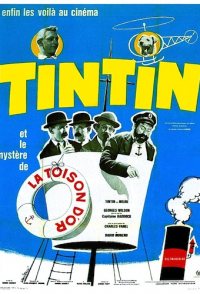 The first movie based on Hergé's character Tintin begins when Temistocle Paparanic, an old friend of Captain Haddock, dies and he inherits Paparanic's ship, "La Toison d'or" or "The Golden Fleece". Tintin and Haddock travel to Istanbul to collect it, only to find that its a worthless-looking wreck. However, soon a certain Anton Karabine offers him 600,000 pounds for it. When Haddock refuses to sell, he's nearly killed. After a while, the truth comes out: Paparanic and his crew led a coup in Tetaragua, a small Latin-American country. After ruling the country for three years, Paparanic left with the gold of the National Bank, and now his old shipmates are to trying get hold of it.