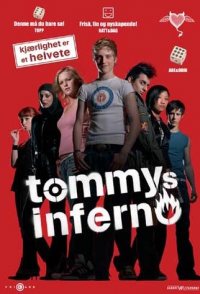 Doing IT, or not doing IT, that is the question for leading man Tommy. His long time girlfriend Maria is ready to take the leap from fumbling touches and making out to the real thing. Tommy on the other hand works part time as an altar boy and has clergy in his genes, has an old-fashioned idea of sex and believes that it belongs within the sanctitude of marriage. Tommy's Inferno is therefore something as unlikely as a story about a boy who is "not ready for IT". When your late father was a priest you never knew and your mother is the personification of adult immaturity and loose morals, you don't have an easy relationship with sex. Tommy is torn between a wish to do what is right based on his mothers mistakes and a sexually frustrated girlfriend desperately trying to get into his pants. Tommy's mother finds love around every corner, the result of this is Tommys charming half-sister Isobel, who likes wearing superhero costumes. She is, in Tommy's worlds, the product of an African "drum...