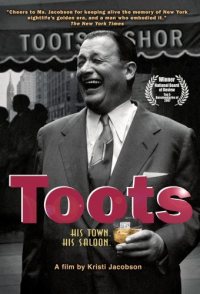 Toots Shor (1903-1977) was Manhattan's premier saloonkeeper from 1940 to 1959. At 18, he went to New York from South Philly, becoming a speakeasy bouncer. In 1940, he opened his place at 51 51st St., the watering hole for sports heroes, actors, mobsters, cops, politicians, visiting dignitaries, and writers. Shor's daughter, Frank Gifford, Peter Duchin, former sports writers, and others comment throughout as the filmmaker mixes still photographs, archive footage, including an appearance on "This Is Your Life," and an audio-tape interview from 1975 to present a portrait of New York during and after Prohibition and of a lovable, larger-than-life, uniquely New York public figure.